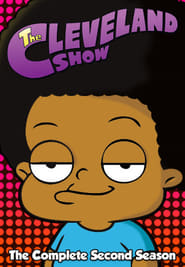 Season 2 of The Cleveland Show, an American animated television series created by Seth MacFarlane, began airing on September 26, 2010 and ended after 22 episodes on May 15, 2011. Fox ordered a second production series of 22 episodes in October 2009. This season included the return of Kanye West for an additional episode after he aired in the first season episode Brotherly Love. The article has The Cleveland Show co-creator Rich Appel stating he hopes there is even more to come and then goes on to say “He could not have been more collaborative or easier to work with. We’re excited, because his character has become a recurring character in our universe… He’ll become our Sideshow Bob!”. The DVD was released as a “Complete Season” featuring all of the aired episodes, in Region 1 on September 27, 2011 and was released in Region 2 territories on January 30, 2012