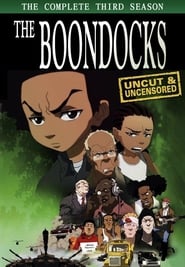 The third season of the animated television series, The Boondocks originally aired in the United States on Cartoon Network’s late night programming block, Adult Swim. Season three started on May 2, 2010 with “It’s a Black President, Huey Freeman” and ended with “It’s Goin Down” on August 15, 2010 with a total of fifteen episodes. All fifteen episodes from season three were released completely uncensored on a three-disc DVD set in the United States on November 9, 2010. In addition all episodes from season three are available on iTunes.