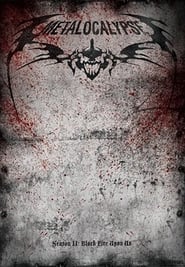 The second season of the animated show Metalocalypse originally aired on Adult Swim from September 23, 2007 to September 7, 2008 with 19 episodes. The show follows virtual death metal band Dethklok. The majority of the music featured this season was released on the 2009 album Dethalbum II. The first episode of this season, “Dethecution” was released as part of the deluxe edition of The Dethalbum. This season featured the new re-recorded version of the “Deththeme”, released as a hidden track on The Dethalbum.