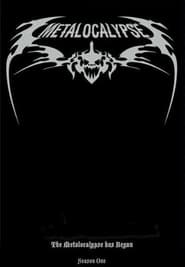 The first season of the animated show Metalocalypse originally aired on Adult Swim from August 6, 2006 to December 17, 2006 with 20 episodes. The show follows virtual death metal band Dethklok. The majority of the music featured this season was released on the 2007 album, The Dethalbum. In late March 2013 this season became available on Netflix.