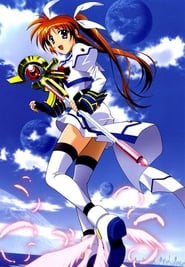 Magical Girl Lyrical Nanoha StrikerS is the third season of the Magical Girl Lyrical Nanoha series. The Nanoha anime was, in turn, a spin-off of the Triangle Heart series of games and OVAs, specifically Triangle Heart 3: Sweet Songs Forever. This season aired shortly after the promotional event “Lyrical Party III” on April 1, 2007. The series focuses more on team-based battles and bureaucracy rather than individual rivalry and school life, due to the change in character dynamics. The name StrikerS refers to an SS rank given to top mages, much like how A’s refers to A rank mages. A special sound stage, under the name of StrikerS Sound stage X was released on October 29, 2008. A manga adaptation, which explored storylines outside of the anime series, ran in Megami Magazine from November 2006 to February 2008.