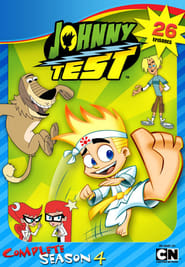 Johnny Test is a Canadian/American animated television series. It premiered on Kids’ WB, on The WB Television Network, on September 17, 2005. The series currently airs in the United States on Cartoon Network, as of January 7, 2008, and in Canada on Teletoon, as of October 28, 2006. The show was produced by Cookie Jar Entertainment for its second and later seasons. The series is rated TV-Y7 for the first four seasons, and TV-Y7-FV for the fifth. Johnny Test started its fourth season on September 10, 2009, containing 26 full episodes. It was the first season to premiere on Teletoon first. This is the first season to be produced in high definition. This season began airing on Cartoon Network on November 9, 2009. This would be the final season for Louis Chirillo and Ashleigh Ball as the voices of Dukey, Mary Test, and Sissy Blakely, although Ball returns later to resume her roles in Season 6. This season, along with the third season, was released on DVD in a bundle on September 13, 2011 in Region 1.