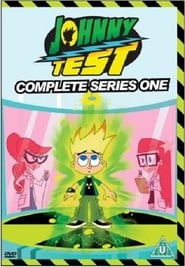 Johnny Test is a Canadian/American animated television series. It premiered on Kids’ WB, on The WB Television Network, on September 17, 2005. The series currently airs in the United States on Cartoon Network, as of January 7, 2008, and in Canada on Teletoon, as of October 28, 2006. The show was produced by Cookie Jar Entertainment for its second and later seasons. The series is rated TV-Y7 for the first four seasons, and TV-Y7-FV for the fifth. Johnny Test started its first season on Kids’ WB on September 17, 2005 with the first episodes “Johnny to the Center of the Earth” and “Johnny X” and ended on July 29, 2006 with episodes “Johnny Dodgeball” and “Johnny and the Attack of the Monster Truck”. This was the only season to be traditionally animated, as the next seasons are animated in Flash, in order to save the show’s budget money. This season, along with season 2, was released on DVD in a bundle on February 15, 2011 in Region 1. It was also released on DVD on February 21, 2008 in Region 2.