The Founder of Diabolism: Season 2 Episode 1

Years ago, the four prestigious sects join hands to try and defeat Wen Ruohan. When Nie Mingjue goes up to attack Wen Ruohan one-to-one, he gets overpowered and Lan Xichen begins to help out. But even with the combined effort, Wen Ruohan’s powers are impenetrable. Finally, Jin Guangyao ambushes him from behind, stabbing him to death and ending the Sunshot Campaign. In the present, Lan Xichen goes to the Carp Tower to visit Jin Guangyao. In the Cloud Recesses, Wei Wuxian tries to run away but Little Apple refuses. He remembers the need for the passage token to leave the Cloud Recesses’s barrier and decides to sneak into the Cold Spring and steal one. He finds someone bathing in the spring and sees their back covered in scars from a discipline whip (which can never be removed). He uses a spell to take the token from the clothing but the bather, Lan Wangji, catches him red-handed. 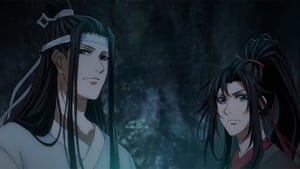