The Founder of Diabolism: Season 1 Episode 7

Wei Wuxian gets lost finding the archery field in the Nightless City and meets Wen Ning while he was practicing his archery. Wei Wuxian asks him for directions and makes an acquaintance. At the field, every capable archers and the respective sect leaders gather for the Grand Discussion that is hosted by the Wen sect this year. When Wei Wuxian spotted Lan Wangji, he pulls a prank on him into thinking his headband is slanted, making the latter annoyed. The clan leaders take their seats, the leader of the Wen Clan sitting higher then the leaders of the other clans in an obvious power play. Right before the competition starts, Wen Ning is picked on by Wen Chao, the Wen Clan’s heir, in which Wei Wuxian steps in to defend his archery skills. However, when told to prove his skills, Wen Ning fails to make a good shot due to nerves. But Wei Wuxian continues to praise him, which leads to Wen Ning’s great trust in him. During the competition, Wen Chao breaks his own rules and causes an argument to break out. When a disciple badmouths him, Wen Chao attacks him with no mercy. Lan Wangji appears in time and saves him, making Wen Chao leave in embarrassment. Wei Wuxian notices that Lan Wangji’s headband is indeed slanted this time, but Lan Wangji refuses to believe. Out of kindness, Wei Wuxian tries to straighten it for him, but pulls the entire band off instead. 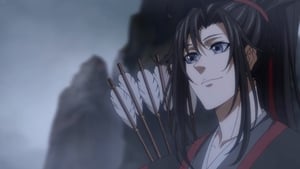