The Founder of Diabolism: Season 1 Episode 6

While the disciples learn about Lan sect’s history, the topic of love raises a question towards Jin Zixuan about which lady he thinks is the fairest. Wei Wuxian comments that Jin Zixuan will choose his fiancee Jiang Yanli, but Jin Zixuan badmouths her. As her brothers, both Wei Wuxian and Jiang Cheng gets offended and Wei Wuxian starts a fight with him. The fight causes their father Jiang Fengmian to personally come to Cloud Recesses to bring Wei Wuxian home. Back at Yunmeng, Wei Wuxian is finally reunited with his adoptive family, but his mother Yu Ziyuan despises him, mostly due to Jiang Fengmian’s favouritism over an adopted son. The situation gets worse when the marriage is called off and Yu Ziyuan blames it on Wei Wuxian, despite Jiang Fengmian’s reasoning. Yu Ziyuan subsequently argues with Jiang Fengmian, straining their relationship further. Wei Wuxian overhears the argument and blames himself for the disputes between the two pairs. He apologises to Jiang Yanli but she insists that love should not be forced if not mutual. One year later, Jiang Cheng returns to Yunmeng after finishing his studies. As the brothers talk, Jiang Chen tells him an archery tournament between the cultivation clans will be held in the Nightless City – the home of the Wen Sect. 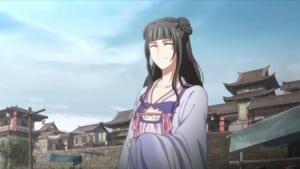