The Founder of Diabolism: Season 1 Episode 13

Wei Wuxian brings Jiang Cheng to Yiling to meet Baoshan Sanren, ordering him to keep his blindfold on at all times and introduce himself as the son of Cangse Sanren. As Wei Wuxian waits on the foot of the mountain, he is ambushed by the Wen sect and stabbed through the chest by Wen Chao’s sword. Wei Wuxian dares him to brutally kill him because after he dies he’ll turn into a vicious ghost and torment the Wen to no end. The Wen throw him into the Burial Mounds where no one, dead or alive, ever returns, and leaves him to die. Following a tip the Jiang brothers were seen at Yiling, Lan Wangji arrive but finds only Wei Wuxian’s fallen bell. When he returns to Gusu, he plays Inquiry but there is no information on him, dead or alive. Lan Xichen returns, having recruited many of the smaller clans to join together and fight the Wen sect and found Jiang Cheng. The Lan sect holds a meeting in the Cloud Recesses to convince the major sect leaders to join their alliance. Jiang Cheng shows up to express his urge for revenge. He and Lan Xichen convince the others into joining them to fight. Back in the Burial Mounds, Wei Wuxian survives the fall and gives in to the resentful energy so he has the power to get revenge. 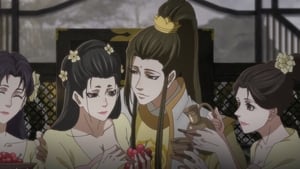