The Delicate Flower Bud is Both Medicine and Poison

Yuri is pleased when the Second Great Collapse is stopped, believing it meant there was no reason for them to fight anymore, only for her father to declare the real battle started now. Chiyu’s wisdom will lead them to victory. When Yuri’s father berates Kark for his failure, Kark coolly says he is his ally, not his subordinate. Since Yuri is present, Kark says Chihiro should be their primary target and lies that he killed Jun and Haru, which Van Drail backs up, adding that he opened the gate to kill the audience members. Grumman plays along and adds that using the concert-goers as a shield was the worst-case scenario since it didn’t stop the Church members. Yuri is left in shock. Shōko happily reports she prevented the Second Great Collapse to Dux, but the other members congratulate only Chihiro for his combat prowess, which frustrates her. When Cerdid calls Chihiro the Lord of Vermilion, Shōko angrily interrupts them as her deeds make her the best candidate for that. They are dubious given Chihiro’s strength and Dux does not answer Shōko when she calls to her, leaving her distraught. In the hospital, it is revealed Haru and Akira are both alive thanks to Cerdid, and Kotetsu remarks how awful Shōko was, walking by the two to destroy the keystone. Since she stopped the Second Great Collapse, Chihiro decides not to press the issue. Shōko realizes all she has to do to become the Lord of Vermilion is kill Chihiro and the others. However, she is killed by Kark first and the Church is burned down by a fallen candle. Chiyu takes Grummen to a house beneath AVAL built identical to Chihiro’s childhood home. Chiyo tells him that if they absorb the ley line energy at the remaining six keystones they can still open the gates. Doing it this way will lead to Tokyo being swallowed to another world. Grummen reveals he’s been trying to bring Chihiro’s mother Mitsuki to him, but this way he can go to her. He doesn’t care what he has to destroy Tokyo or the world to do it. Chiyo begins, the system recognizing her ID as Mitsuki. Above, Yuri watches a doctored video showing Chihiro defeating Jun, Akira, and Haru. Grummen states he has been seduced by power and he’s no longer the Chihiro she loved, merely a victim whose consciousness is being consumed by the Lord of Vermilion. He says Yuri is the only one who can stop him from becoming the Lord of Vermilion and save him. The other heroes find Shōko’s red stone and Dux tells them AVAL has a new plan – to take Tokyo to another world. Kurome asks if they should stop them, since the destruction of Tokyo was their original plan. Yuri meets Chihiro at their childhood home while Cerdid spies. Chihiro says he still likes Yuri, relieving Yuri who believes the video she saw was a lie after all. Chihiro disagrees and says he killed the concertgoers after all, and he had no choice but to kill them. He had to kill a few to save the rest, and Yuri realizes he has changed. She begs him not to fight anymore, fearful his power would destroy him, but he has to honor the wishes of Inuki and Kakihara. Yuri disagrees. She needs Chihiro, no one else. They should run away and abandon everyone to be together, but Chihiro apologizes, walking away. Yuri realizes she has to save Chihiro after all, transforming. Again, Chihiro recalls the two of them killing each other in the first episode. Cerdid ensnares Yuri in plants, slowly strangling her, stating Chihiro started treating her coldly while spending time with Yuri. She fears her master will die with her. She will stop her, even if it means her master hates her for the rest of her life. Yuri’s kills Cerdid and flees. Chiyo begins the transfer of power, which makes the AVAL building collapse and the house at the bottom and keystones rise. Chihiro, Kotetsu, Koume, and Tsubaki, the last four, fly to AVAL. 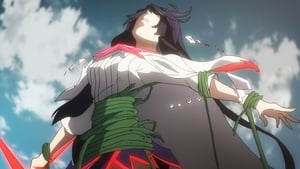 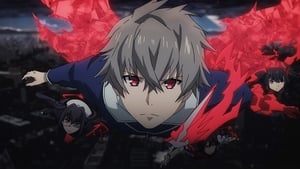 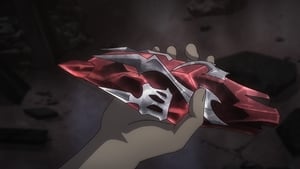 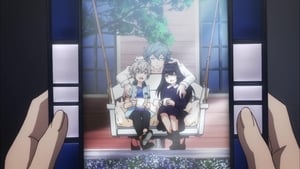