The exile Obusuma Saburō tells fellow exile Shiraishi that they have no responsibility to defend Tsushima. Meanwhile Nagamine tells Jinzaburō that the Toibarai will never abandon their castle fortress even though they lack numbers to adequately defend it. After sparring with some Toibarai soldiers who challenge him, Jinzaburō promises Nagamine that he will help with their defense. Meanwhile Obusuma reveals to Shiraishi that he has a pass enabling him to safely contact the Mongols, saying he’s happy to serve whoever rewards his effort. Shiraishi refuses to join him, but he kills Obusuma whom he distrusts, and takes the pass himself. In the Mongol camp, Obusuma Uriyan Edei’s commanders are frustrated of the disappearance of the Japanese islanders, but Uriyan Edei only agrees to pursue them if he has verified information about their location. At the Chikuzen Dazaifu Magistrate Fortress on the mainland, they prepare to reinforce the Tsushima defenders who are hoping for reinforcements, but doubt that they will arrive in time. Meanwhile, Shiraishi approaches the Mongols himself and offers information about a weakness in the castle fortification. He later returns to the castle with a dead boar to allay suspicions about his disappearance. 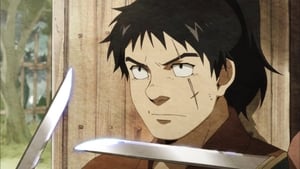